I had just arrived home from work when I noticed that the usual all-barking-and-looking-for-food local dogs we had in the compound had all but disappeared.

‘That’s a good thing biko’, I thought to myself for I detested those annoying dogs that chased fine girls away from the compound.

But something in me wanted to get to the bottom of the “missing dogs” issue.

“Mama Vivian, what happened to the dogs in the compound’, I asked my neighbor like I cared.

“Landlord has sold them ooo but there is one pregnant one that just gave birth at the back of the house”. She said.

‘Ehen. I though as much. No wonder I slept well last night, no barking at everything they see at night including ghosts (heard dogs see ghosts)’, I thought to myself.

I proceeded to the back of the house and saw six beautiful less-than-a-day old puppies laying on the ground.

The bitch (female dog) mother was no where to be found but the fear of her jumping at me from an undisclosed location for touching her puppies made me keep a very respectable distance while I took a picture of the puppies.

Fast forward a month after their birth and I became fond of the puppies. I regularly checked on them, petted them and occasionally fed them.

Then I noticed something heartbreaking.

One of the puppies had a misformed forearm. Its left forearm didn’t form the proper way so it couldn’t use it to walk. It had to depend on the right forearm to walk and hopped rather precariously. 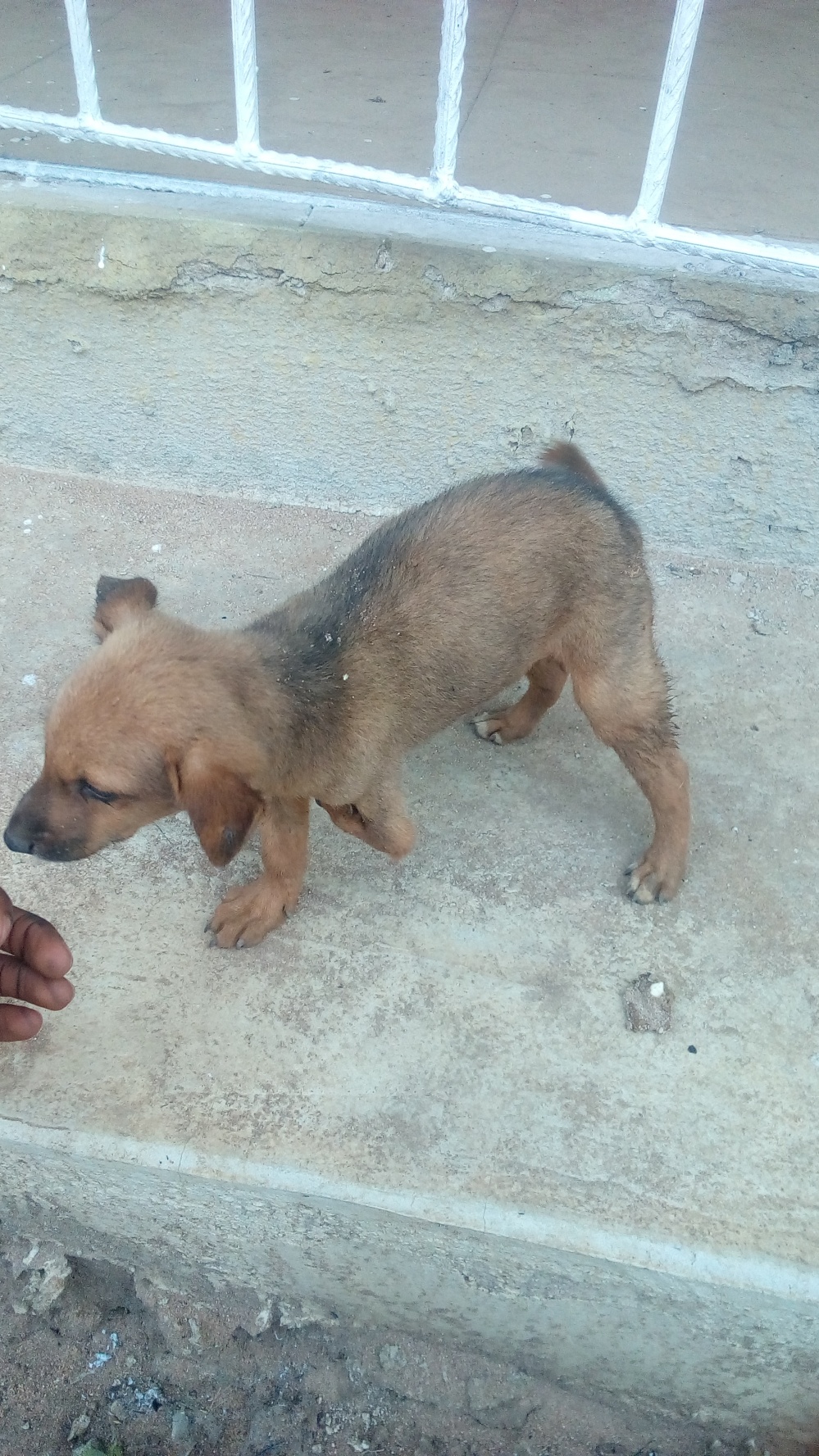 I took keen interest in the puppy and treated it like it was mine. Fed it milk (powered milk and water) everyday before heading to work and tried to give it some of the food I eat for dinner.

I named it Lucky for it was lucky to have one forearm while others were complete.

‘Lucky to have one forearm?”, my neighbor’s asked in amazement.

Lucky became my padi. It was always on my doorstep anytime I got home from work wagging it’s tail at me. I even invited it one day into my house to watch MTV Base but it didn’t look too interested.

Then I had to travel for the holidays.

Remember Lucky had only one forearm and whenever food was available, it’s able bodied siblings would get to the food before it. Lucky wasn’t too lucky when it had to do with fending for itself so I had to feed it whenever I could.

I begged Mama Vivian to help me feed it whenever she could until I got back and she agreed without hesitation.

I got back a few days later to meet a fat looking Lucky. Obviously elated to see me, it wagged it’s tail left, right and center.

Now this is where the story takes a sad but actually very lucky turn.

I woke up in the morning a few days after I got back to see Lucky as bubbly as ever but no sign of it’s siblings that would always come to join it eat whenever I fed it.

“Mama Vivian, where are the other puppies”, I asked my neighbour.

“So you are not aware? They all died one after the other yesterday. We buried them in front of the house”

In her theory, the puppies were poisoned because they all were excreting blood and had white foam all over their mouths when found dead.

“Who would have poisoned lovely innocent puppies”, I said fuming.

To cut the long story short, it seems due to Lucky’s lack of mobility, it wasn’t available to be poisoned or the other puppies had finished the poisoned food before it got to it.

Lucky was the only puppy left out of all and there were seven in number.

“When you named it Lucky, it didn’t make sense then but now it does. This dog is really lucky to be alive” said Mama Vivian.

Morale of the story:
Even in disability, lack of financial succour, economic meltdown, family dysfunction, as long as you have breathe in your nostrils. You are lucky to be alive. Not by your power or might but by God’s grace.
As you enter a new year, hold his grace in very high esteem, walk with a spring in your footsteps and a broad smile on your face and remember as the enemies couldn’t get Lucky the dog, no evil is permitted to come close to you this year. You shall see the end of this year and this year shall not see your end.