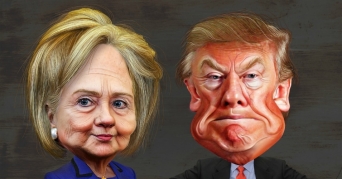 The race to become the 45th President of the United States has entered its final stages with business mogul and Republican Party candidate Donald Trump in a bitter winner takes all battle for supremacy with Democratic Party’s Hillary Clinton.

Both candidates are neck and neck in most polls and the election could become the most tightly contested election in the country since the Bush v Gore spectacle of year 2000.

As close as these elections are, it’s surprising to note that the major talking points in the race aren’t the candidate’s policies on health care or foreign policy or even the economy.

The hair raising, mouth wagging, opinion dividing and even votes shifting points of these elections aren’t what the candidates have pledged to do for their country if elected but what they did in their pasts.

For Hillary Clinton, the use of her family’s private email server for official communications, rather than official State Department email accounts maintained on federal servers during her tenure as the Secrtary of State have marred her campaign

And as for the enigmatic Donald Trump, accusations of sexual harassment by about a dozen women which came to a threshold after a tape leaked of him admitting to sexually harassing women because “when you’re a star, they let you do it, you can do anything…grab them by the pussy.” (His own words).

Both very unlikable candidates have been dodged not by their future plans but by their pasts. Pasts that could and would cost either of them their place in history.

As both Clinton and Trump have learnt the hard way, pasts stay in the past until your future comes knocking.

In Donald Trump’s own words “if I had known that I would one day run for President, I might have behaved differently in the past”.

You might not see yourself in the political sphere or one day running for a big office but no one knows what the future holds.
Don’t spoil your records just because of impatience.
Don’t tarnish the image your future self would need to build a legacy.

Take life easy. Why the hurry?