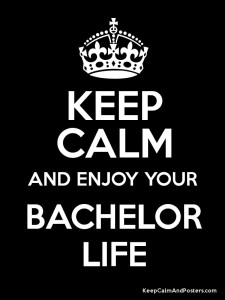 After discussing the added pressure a bachelor faces by attending weddings in the first episode of our Bachelor’s Life series, click HERE to read. In this installment, we are going to be describing the 8 types of bachelors.

1. Bachelor 1 (20 – 22 years):
This is the first stage or often called the virgin stage of bachelorhood. As soon as a man capable of impregnating a girl quits his teenage years (13 to 19), he automatically becomes a bachelor. He is still a young inexperienced man still probably in school and leaving with his parents. He is incapable of getting married at this stage and is given a pass to “enjoy life”.

2. Bachelor II (23 – 26 years):
This is the second stage of bachelorhood and the stage where a young man starts to fight for his independence. He is about finishing school or just completed service and has to learn the ropes of fending for himself. Only a handful of guys get married at this stage, maybe 5 in 100. Any man that marries at this stage is either the son of a rich man, got his girl pregnant or just a remarkable young man (I envy him).

For Girls: If you are eager to get married, please don’t date a guy in this stage unless you guys are childhood sweethearts. Please leave him to make a name for himself. Marriage is not a plate of beans. You know how much ordinary Pampers costs?

3. Senior Bachelor (27 – 29 years):
The third stage of bachelorhood is the most critical stage. It’s at this stage that a man starts getting the “when are you getting married” stares from relatives. He is knocking on the door of 30 and at this stage should have a stable source of income and has moved out from his parent’s house. For those working in the same vicinity as the family house, no need moving out yet but start making plans. You are getting too old and being unable to bring girls to the crib (often referred to as the bachelor pad or slaughter house) is a sad sight.

For Girls: At this stage, being in the same age bracket as your Senior Bachelor boyfriend is an added layer of pressure to yourself. You need to exercise plenty patience. If you can’t, move on because you are gonna be frustrated.

4. Principal Bachelor (30 – 33 years):
The fourth stage of bachelorhood is the “keep deceiving yourself” stage. It’s at this stage that guys swear that they will get married but with every news of a broken celebrity marriage, with every failed relationship, with every money problem, with every fuel increase comes additional excuses.
Most bachelors are this stage are excuse manufacturers.
Suffice to say that this is the most ideal stage to get married and the most common age bracket for the transition from bachelorhood to married life.

For Girls: Dating a guy before he enters this stage, behaving yourself, working for your money and faithlessness is the gateway to getting that ring. He is ready, trust me. He is just making sure he dots the i’s and crosses the t’s before proposing. Give him a reason to doubt you and expect him to delay and delay until temptation will lead you astray.