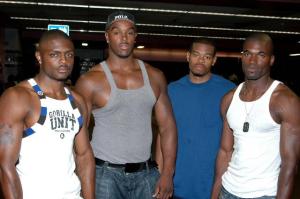 1. Gum body: A few years back, there was this beautiful tall elegant girl I kept admiring in church and intended walking up to given the right time to say hi. The only problem was that she was always with this good looking fellow. Always. One didn’t need a fortune teller to tell you they were dating. So I just lost interest after a while.
Years after, we somehow became friends and I asked after her “boyfriend” and her reply shocked me. She said “I have been hearing the same thing in church, that me and him are dating because we’re always together. But we never had anything going on”. She then jokingly added “I think I need to stay away from him because it seems he is spoiling my market”.
Many girls have lost potential suitors because of the “gum body” mentality of some men. They tag around with a beautiful lady, act like something is going on and scare suitors away.  Ladies should learn to stay away from men that don’t say their mind, form padi-padi and just want to be around you for no clear reason at all.  They are show spoilers. Stay clear.

4. Player extraordinaire: It’s no secret that men are polygamous in nature and it takes the grace of God, character and self control for a man to stay with a woman and remain faithful. Some cheat and later regret while others don’t even hide their promiscuity.
The type that play “test your luck” on Facebook with many girls using the same lines and wait for anyone that falls for the bait. The type that has more passwords on his phone than a CBN bank account. The type that goes behind your back to toast your friend. The type that drolls over any girl that passes bye. Those types with “sweet mouth”.
Players are bad boys and girls like bad boys but in the long run they either end of changing him into a good boy or end up heartbroken. The latter is always the case. Stay away from them.

5. Mr. Kiss and Tell: I remember dating this beautiful girl while in the University. She wasn’t only beautiful but she was very intelligent and most of all had this very voluminous God given milk production organs. I remember going out a few times with her and upon my return to the hostel, my annoying friends would surround me and be like “guy, gist us na, how does that girl taste?”. My reply would always be “none of your business, go and get your own…lol”.
Many guys would be tempted to bask in the “glory” of dating such a damsel and spill all the beans but I am not that kinda of guy.
As the saying goes, “what happens in Vegas, stays in Vegas”. What happens between me and a lady, stays between me and the lady. Nobody has to know.  Sadly, not all men share this point of view. Many would proudly tell anyone who cares to listen of their escapades with Sade, Felicia and even Grace. Stay away from men that can’t keep their legs and their mouth closed.

6. Excuse maker: You know those kind of men that sit around and blame their misfortune on Buhari, lack of fuel, rising Dollar rate or even the epileptic power supply. The kind of men that never take responsibility for their actions and tend to blame everybody else apart from themselves when things aren’t going well. These are the professional excuses pushers. These men would blame you for their financial problems when they marry you. You know the “I was rich before I married you, but now look at me” kind of men. These are they.

7. People basher: I don’t know about you but I find it very discomforting when people speak of others behind their back. I wouldn’t give you the room to speak ill of anybody behind their backs. Not even someone I dislike. So when you see grown ass men, sit down and joblessly bash others. When you see a man speak ill of his ex like she was a street urchin. My sister, he has a loose mouth, no character and would readily speak ill of you tomorrow. Stay away.

8. Never speaks his mind: I grew up and realized that the way women and men communicate are very different. Men are known to be vocal and say their mind through their words. Women on the other hand aren’t so vocal and tend to speak their mind through their actions. So therefore, a girl likes a guy but she would never come out straight. She tells him her mind through her actions like calling him, spending time with him etc. However, when a man hangs around a woman for too long and begins acting like a woman by not saying his mind through his words but through his actions then something is wrong. A man should be able to state categorically what he wants from a woman within a specified time frame and not keep her guessing. If he keeps playing dumb, stay away from him. He is either confused or not courageous enough to say his mind. Signs of a boy.

9. Doesn’t like children: The love I have for children is literally unquantifiable. Simply put, children make me happy and I’m sure the feeling is mutual. This love gives me the patience and tender care to talk to them, advice them, scold them, encourage them and love them as tender as their age deserves. But when a man doesn’t like children (I don’t mean his kids, other kids). He doesn’t have the patience to deal with them, in fact he doesn’t even know how to handle or talk to kids. It’s a big turn off and that’s a major sign of a man that would shift all the responsibility of parenthood to his wife. Such man would be content with providing money for the family but never hands-on in the upbringing of the children.

Bonus:
11. Woman beater: If a man beats you and you remain with him because “you love him” then OYO is your case (in Clara Ikemba’s voice. A role played so well by Nollywood’s Rita Dominic in the movie “The Meeting”). You will soon be looking as “beautiful” as her character in the movie. Lol