I was but a little boy who understood nothing about love apart from the husband and wife descriptions we gave boys and girls fond of each other in Elementary (Primary) school back then.

It was with this bewilderment that I struggled to comprehend Jack Dawson’s action in the movie Titanic. The mighty once described as unsinkable ship hit an iceberg and sank. That I get.
He was stuck on a wooden raft with the love of his life (love of less than a week, mind you). That I get.
He decided out of love to give her his life jacket. That I didn’t get.
He then proceeded to stay half way in the ice cold water while his love was on the raft with a life jacket on. That I didn’t get also.
To top it all off, he ended up dieing for love. What a travesty.

The movie had ended but instead of feeling sadness as many movie goers might have, I was angry. My anger directed towards DiCaprio’s character.
“Why on Earth didn’t he join her on the raft? Why didn’t he wear the life jacket and save himself first? Why was she so selfish as not to care about his well-being? What is this love thing that would make a man sacrifice himself for another and ultimately, who was this foolish love drunk man that made this grave mistake?” were just but a few of the questions that riddled my small immature mind back then.

The last question was what began my childish obsession with the then 22 year old Leonardo DiCaprio (Jack Dawson in Titanic).

The more I learnt about him, the more fascinated I became. A man named after the famous painter Leonardo da Vinci because his first kick in his mother’s womb occurred while his pregnant mum was viewing a Leonardo da Vinci painting in a museum in Italy.

He was later born in Hollywood (yes the famous Hollywood) in California sometime in November 1974 to a German born mother and an Italian/German father with two of his late grandparents being Russians. Talk about diversity.

He was just a year old when his parents divorced and he ended up living mostly with his mother and to top it all of, he is a high school drop out. Talk about overcoming adversity.

Over the years, following Leonardo and his movies was sort of a ritual. It all started with Titanic, then came his outstanding performance as Frank Abagnale Jnr in “Catch Me If You Can (2002)” where he portrayed this witty, smart, brave and sweet young con artist. 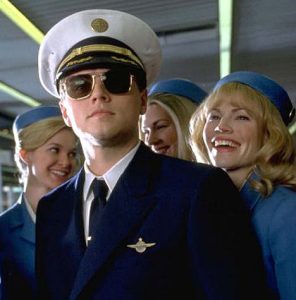 Another performance that caught my attention was his portrayal of Danny Acher, the diamond smuggler/dealer in Blood Diamond (2006). 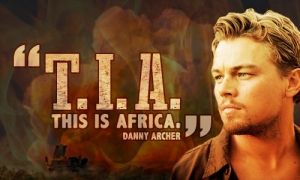 Other movies went bye but none captivated me until the performance of a lifetime in Django Unchained (2012) where he proved his mettle as one of the best actors on Earth with a remarkable portrayal of a slave owner.

Then came the Jordan Belfort performance in “The Wolf of Wall Street (2013) that saw his stock rise as an A list actor. 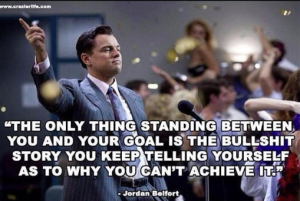 But nothing could ever compare to his heart wrenching, thought provoking, mind boggling portrayal of Hugh Glass in the movie “The Revenant”.

According to Wikipedia, Leo Baba (as I have decided on calling him) has acted in 30 movies, amazed millions of dollars and fans, won several awards but never won an Academy Award (Oscar).

He was nominated for his first Oscar in 1993 for his portrayal of Arnie Grape, a mentally unstable boy in the movie “What’s Eating Gilbert Grape” but lost out. He was however nominated on three other occasions (2005, 2007 and 2014) but failed to land the converted gold stature.

Everything changed early this morning (around 5:45 am Nigerian time of the 29th day of February, 2016) when finally after 23 years of waiting, he FINALLY won his first Oscar (not proud to admit but I shed a tear or two when his name was announced as the winner).

To put his wait into context, my only sister who graduated with a first class in Computer Science (please allow me gloat in peace, don’t hate..lol) in 2014 and finished serving her fatherland in 2015 wasn’t born when he was first nominated for an Oscar. To further emphasize the long wait for an Oscar, General Sani Abacha had just started ruling Nigeria by the time Leo was nominated for his first Oscar. To further buttress my point, famous footballers Cristiano Ronaldo and Lionel Messi were both 8 years and 6 years respectively when DiCaprio was nominated for his first Oscar. He finally won one in 2016. Talk about perseverance.

Leo Baba is an embodiment of professionalism, dedication to a craft, sheer will, stupendously gifted ability, mental stamina and most of all poise.

As proof to his sheer unrivaled dedication to his work, when asked about his experience filming “The Revenant”, DiCaprio stated: “I can name 30 or 40 sequences that were some of the most difficult things I’ve ever had to do. Whether it’s going in and out of frozen rivers, or sleeping in animal carcasses, or what I ate on set (raw bison). [I was] enduring freezing cold and possible hypothermia constantly”. You have to watch the movie to understand my point. Below is the picture of a bison.

It took him over 20 years before his amazing career in movies was finally capped off with the converted Oscar. At the tender acting age of just 41 years, I am quite sure it won’t take that long for the next Oscar to arrive.

This titanic wait teaches us important lessons about life: self believe, dedication, be the best you can be and most of all, never ever ever give up.

To all Leonardo DiCaprio fans out there, our man finally did it. To the man of the moment himself, thank you for the many years of inspiration. You have always been great in my eyes but this Oscar just affirms your greatness in the eyes of the World. You are deeply loved and well appreciated.

From your biggest fan in this part of the World.

BONUS: Below are my BBM profile updates while watching the awards show. I was hysterical, so please pay me no attention. 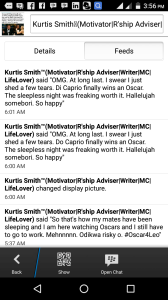