While undertaking my Industrial Training (IT) in one of the multinationals in Port-Harcourt, I was lodged in one of the hotels in the beautiful city. While relaxing at the lounge of the hotel one fateful evening, a beautiful vibrant and well dressed lady approached me and asked for the location of Room 307. I was like “ehmmmmmmmmmm, I don’t know where that is but I could help you find it”. So I got up and we went around looking for the room but to my ’embarrassment’, the room we were looking for was just a stone throw from where I was seated at the lounge. We laughed about my ignorance, she entered the room and I went back to my lounging position on the couch while chatting on my phone. About 10 minutes after and as I was just about retiring to my room, I started hearing sex noises from the same room I had ushered the beautiful lady into. The noises grew from minor body clashes like “pa pa pa pa pa” to major sex moans like “ahhhhh, shiiiiiiiiii” then the sound that drove me to my room was when I heard what I believe where cries and horrifying sounds from the girl like “ewooooo, its painful, OMG, take it easy”. To God who made me, I am not making this up. I left to my room almost immediately and I don’t know what became of the girl.

This happened over 5 years ago and as the young boy I was I couldn’t comprehend what the girl was. I didn’t know who runs girls were then, as a matter of fact I hadn’t even heard the name before. Was she the man in the room’s girlfriend? But I thought to myself, even if she was his girlfriend, sleeping with her almost immediately after she stepped into the room wasn’t a loving thing to do with someone you are dating. Maybe she was a prostitute, but the little I had heard about prostitutes (in Nollywood movies and driving pass brothels) was that they were mostly by the roadside, wearing skimpy clothes showing off their assets, didn’t really speak good English, had big tummies and looked haggard. But this young girl was the exact opposite, she was tall, beautiful, very well spoken, well dressed and looked nothing over 23 years. She can’t be a prostitute, so what was she?

A year or so after that incident, I had just finished school and visited a cousin in Abuja. I had just a week to stay so we decided to paint the town red (have fun). We were at one of the bars in the town one Saturday eating hot pepper soup and cold beer when the sight of beautiful young looking girls (about 5 or 6) alighted from a bus and approached a table of big (married looking) men just in front of us. These girls looked saliva-tingly sumptuous and turning to my cousin I jokingly said “bros, how many girlfriends do these men have, make them give is one na”. Then he made the statement that answered my age old question, when he said “these are University girls joh, they are runs girls and only do it for the money”.

OMG, it all became clear. The girl from the hotel lounge a year ago looked and dressed like these girls. So she was a runs girl. Then began by interest in what I term the “run girl phenomenon”. Why do they do what they do? Who are they? Are they proud of what they do? Does it bring them joy? Is there no other way other than selling their bodies?

Who is a runs girl by the way? Simply put, a runs girl is a lady that sleeps with a man for money/gifts/favours. But from a broader perspective, run girls are high class chicks embedded in every society. They are smart looking, daring, mostly educated, beautiful and sexy. Their sources of incomes are usually questionable. The kinda of girls that live above their means. The kind of girls that go clubbing every weekend alone or with their girlfriends and always leave the club with a man. The kind of girls that look expensive all the time when they are not even earning an income or have well-to-do parents. The kind of girls that live in high brow areas on the Island while their parents are living on the mainland or in the village. Runs girls don’t miss church so don’t be deceived. A runs girl usually has serious a boyfriend but lives by the adage “never leave all your eggs in one basket’. They are the type of girls that are always on the move, today its Abuja, tomorrow its Lagos, the next week its Port-Harcourt. Runs girls are in most cases students but their movement in school is always suspicious. Runs girls have a clique of runs girl friends, the type that tells them where and when it’s happening. Runs girls hardly move alone, they tend to move in groups for security purposes. Runs girls don’t necessarily like sex but have learnt to enjoy/endure for business to move forward. 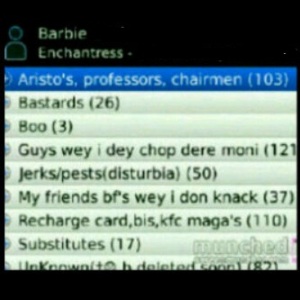 I have met and spoken to countless number of run girls ever since that day at the hotel lounge and most (never slept with any though ).

Some of the top 5 reasons runs girls give for doing what they do is:
i. To have fun and make money in the process.
ii. To live large like a big girl.
iii. To acquire the beautiful things of life.
iv. To feel among.
v. To fend for myself.
As I ploughed through their reasons, one thing caught my attention. Most runs girls don’t sleep around to pay their school fees (their parents or guardians do that already) or even fend for themselves (they have enough to survive). It goes to show that greed (living above one’s means) is the main denominator to the runs girls phenomenon while as for prostitution, to survive is the main reason they do what they do.

What makes a runs girl different from a prostitute though. According to Wikipedia, prostitution is defined as the business or practice of engaging in sexual relations in exchange for payment of some other benefit. So simply put, runs girls are simply high classed prostitutes. Prostitutes are knows for their public display (seen around brothels, wear skimpy clothes, mostly illiterates and are priced as low as N5,000/night with low class customers). Runs girls on the other hand are mostly undergraduates or fresh graduates (even corpers). They are too high classed to been seen hanging around brothels, they are mostly in their school hotels/flats waiting for the right “runs”. They do home/hotel visits and mostly priced from N10,000 to N300,000 a night depending on the caliber of the customers (artistes, governors, senators, bankers, oil workers, big men etc).

The runs girls phenomenon has taken Africa especially Nigeria by storm. With married men being 90% of their customer base, it goes to show that even family men are not innocent in the growth of such decadence. Not only has such path landed many girls in the mortuary with tales of ritualists targeting young girls (runs girls) for their body parts but it has also led to a social hagga, a societal odiferous which would surely end these girls in a state of calamitous pestilential terra firma (in the words of the Honorable Patrick Obahiagbon). A word is enough for the wise. 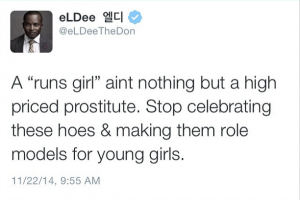