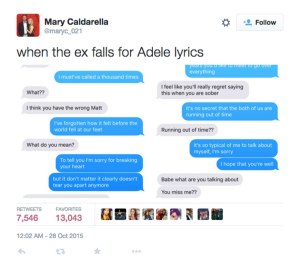 It’s no longer news that Adele is back on the world stage with the smashing hit “Hello”. The song is the first single from Adele’s upcoming third studio album and it’s been smashing records left, right and center since its release in late October. Among its achievements so far include:

It’s a remarkable series of achievements that demonstrates the popularity of the new song by the British songstress. But one might ask, “what’s all the fuss about?”

Here is why:
“Hello” is a song detailing how a woman contacted her ex to make amends and apologize for everything that happened which resulted in the end of their relationship. Following the release of the single, whatsyourprice.com conducted a survey asking if anyone was inspired by the song enough to contact their ex due to the song’s subject matter. They reportedly polled 41,000 men and women and below are the results.

This goes to show the power of the song and its lyrics on the emotions of people especially women.

However, it was Ellen Degeneres’ hilarious ‘phone conversation’ with the star – that has highlighted another angle which Twitter users have now taken up as the #hellochallenge. It involves typing out the ‘Hello’ lyrics to a phone contact (ex/friend/parent) and seeing how long you can go on for without the other person thinking you’re completely insane!

I decided to have some fun by Googling the lyrics of the song and using it to message a few of my ex’s who I hoped hadn’t heard the song and play a fast one on them.

First was Jade (not her real name), we never went past friends but her reaction was exactly what the prank was about…lol

Next was Princel (my pet name for her when we dated). She was caught in the joke’s nest but later found out…lol 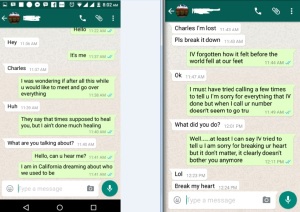 It didn’t go so well though, one ex cursed me out…lol while the other knew the lyrics and used it on me but at the end it was fun.

You wana play the game? Below are the lyrics of the song, use it and chat an ex/friend up and see how far it goes. #Enjoy

Hello, it’s me
I was wondering if after all these years you’d like to meet
To go over everything
They say that time’s supposed to heal ya, but I ain’t done much healing

Hello, can you hear me?
I’m in California dreaming about who we used to be
When we were younger and free
I’ve forgotten how it felt before the world fell at our feet

There’s such a difference between us
And a million miles

Hello from the outside
At least I can say that I’ve tried
To tell you I’m sorry for breaking your heart
But it don’t matter, it clearly doesn’t tear you apart
Anymore

Hello, how are you?
It’s so typical of me to talk about myself, I’m sorry
I hope that you’re well
Did you ever make it out of that town where nothing ever happened?

It’s no secret that the both of us
Are running out of time…………..