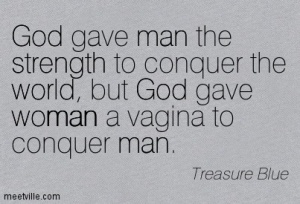 1. I once asked a girl how many holes she had and she said just one. She had the notion that urine comes out from the vagina and she couldn’t be more wrong. While a man has only one hole (two if the anus is included) that functions as the urine and sperm channel, women are wired differently. From front to back, the urethra opening is the first hole, the vagina is the second, and the anus is the third. Don’t laugh! You’d be amazed how many people don’t know this.

2. I have heard rumors of ladies being afraid or should I call it too shy to reach into their vagina and pull out maybe a pulled condom. The vagina doesn’t connect to the lung. Anything that doesn’t have the swimming abilities of the sperm will remain stuck in the vagina so the sooner you reach deep down and pick it out, the better.

3. The woman’s anatomy is blessed or cursed (according to some women) with the hymen. The presence of the hymen is often used to determine if a woman is a virgin. The lose of a hymen is not always due to sexual intercourse but in most cases it is. Contrary to popular mythology, there’s no such thing as being revirginized. Once you lose it, it’s gone. Just so you know.

4. Every vulva is different and special. Some lips hang down. Some are tucked up neatly inside. Some are long. Some are short. Some are even. Some aren’t. All are beautiful. You’re perfect just the way you are. *wink*

5. The vagina is a carefully balanced ecosystem of fluid (discharge) and bacteria meant to keep the vaginal PH at a healthy 4.5. This combination of fluid and bacteria that make up the vaginal discharge that can, at times, emit certain odors. Most of these odors are natural and normal, but there are times when excess odor can signal a problem. The vagina is not supposed to smell like rose petals or strawberry or a bathroom spray or even a garden. It is a pussy, let it smell like a pussy. The vagina doesn’t need to be douched. Wash it with clean water (no soap) as often as possible and change undies on a daily basis and you should be fine. Remember, the vagina doesn’t need to be douched.

6. How much vaginal discharge you make varies widely. Some normal, healthy women spew loads of discharge and need to wear panty liners every day. Others are bone dry. As long as you are not at risk of STD’s and you have no itching, burning, or odor, you’re probably just fine. If in doubt, see your gynecologist.

7. To the ladies, have you ever wondered why sex hurts after you haven’t had it for a while? The vaginal opening is like a bicep. Use it or lose it. The more sex it has, the freerer and more relaxed they are. If you don’t have a partner or your partner is away on a business trip, keep them exercised and I am not in away advocating for a promiscuous lifestyle. Prayer cannot help in this aspect, pick up a battery-operated boyfriend to help keep things healthy as you age. If properly tended, your vagina will be able to pleasure you until the day you leave this life.

8. Vagina stretches out when you have babies naturally. It’s natural but it can leave you feeling open down there. Kegel exercises that contract the muscles of the vagina really do help. To do them, practice stopping the stream of urine when you pee. There–that’s the muscle! Now contract and relax it for three or more sets several times per day.

9. During sexual intercourse, the condom is often used as a means of preventing sexually transmitted diseases and it works mainly because it protects the penis from the inside of the vagina but what people have failed to realize is that if the sensitive skin of the vulva touches the skin of the scrotum, infections like warts, herpes, molluscum contagiosum and pubic lice could be transmitted easily. So pick your partners carefully.

10. Some women do ejaculate during orgasm, but you’re normal if you don’t. The controversial “female ejaculation” most likely represents two different phenomena. If it’s a small amount of milky fluid, it likely comes from the paraurethral glands inside the urethra. If it’s a cup, it’s probably pee. Many times, it may be a little bit of both. But don’t stress out about peeing on yourself. Put a towel under you and surrender to the experience. *seriously*

11. Most women don’t have orgasms from intercourse alone. The clitoris is where the action is. Most women who do orgasm during sex have figured out how to hit their sweet spot, either from positioning or from direct stimulation of the clitoris with fingers.

12. An innocently ignorant lady once asked me if she had problems because her pussy makes some weird sounds during sex. I am confident many ladies find this embarrassing but vaginal farts as they are called happen to almost all women at one time or another, especially during sex or other forms of exercise. Don’t be embarrassed. You’re perfectly normal.

13. The vagina is blessed with the “secret well of wetness” which flows when a woman is sexually aroused and during sex. But, most times, the vagina will need artificial lubricating either because it is not well lubricated naturally or because of age. Don’t be afraid to slick on some lubricant like K-Y Jelly or Astroglide. Or try coconut oil, which is a great natural lubricant.

14. The vagina’s ability in its supposedly small state to stretch wide enough to eject a baby is one of the wonders of life. Then, someone has the effrontery to tell me that the same organ that can stretch wide enough to eject a baby cannot stretch to receive a penis comfortably? Sex shouldn’t hurt, but it does for many women and this could be as a result of many things including; lack of sex, long time of abstinence, size of penis or other medical reasons and in this case seeing your doctor is advised. So many women are too embarrassed to say anything, so they suffer in silence.

15. Safe sex (or even just orgasm alone) is good for you. Benefits include lowering your risk of heart disease and stroke, reducing your risk of breast cancer, bolstering your immune system, helping you sleep, making you appear more youthful, improving your fitness, regulating menstrual cycles, relieving menstrual cramps, helping with chronic pain, reducing the risk of depression, lowering stress levels, and improving self esteem.

References:
Why Does My Vagina Smell? by Heather Rupe, DO
20 Things Every Woman Should Know About Her Vagina by Lissa Rankin, MD

For relationship or sexual advice, contact Kurtis Smith on BBM via –> Pin: 33322C83