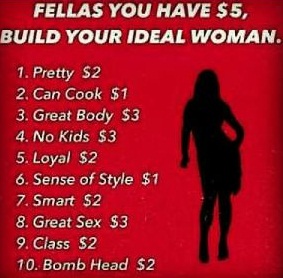 Welcome back to the concluding part of this entrailing series. Last time, I gave 50 ladies, $5 each to build their dream “man” given a specific set of qualities each with their respective price tags. It was an eye opening survey because it revealed to us what most Nigerian women (since all sampled opinions were from Nigerian women) wanted in their dream man. Click HERE to read.
This episode is about the men and the qualities they want in their women. 50 guys were given $5 each to build their dream “woman” given the following qualities with their respective price tags;

Below are the listed qualities in an order of most votes to least votes.

From single votes to permutations, let’s take a look at the top 10 double combination qualities that most men are looking for in their woman.

Still on permutations, let’s take a look at the top 5 triple combination qualities that most men are looking for in their woman.

Observations from the results:
1. Loyalty amassed the most votes with 32 which goes to prove that men always pride themselves on the loyalty of their women to them. It’s no secret that men find it more difficult than women to forgive a cheating spouse because their ego and pride is tied to their woman’s loyalty. Loyalty to a man means standing by him through thick and thin, through lack and plenty.

2. Good cook got the second most votes with 31 men choosing the belly satisfying option. One of the ways to a man’s heart is through his stomach. A woman that performs magic in the kitchen has the key to her man’s heart in her hands. Most women delegate such an important aspect of marriage to the house-help or the cook or chef. The problem with this option is the woman looses her bargaining chip. Let’s imagine a woman wants something from her husband or wants forgiveness for something she did to him. The quickest way to get his heart is to prepare his special dish for him but when she can’t cook or someone else does the cooking, she looses that edge.

3. Smart got a total of 28 votes while pretty had 25 votes. This shows two things; men like a smart woman. A woman that stimulates them mentally. A woman that he can take to meet his friends and not be embarrassed by her use of English or mannerism. It also shows that men like presentable women. Not only should she be smart but she should be eye catching. The kind of lady that before she speaks (mentally), her looks are already speaking for her (physically).

4. Shockingly, great sex and good body got a mere 3 votes and 2 votes respectively. Its shocking because men are known to be more active than women when it comes to sex. Men are known to like big breasts, big ass, big hips and a dashing body. Men are known to be sex beings but this survey goes to show that although men love sex, they know that there are more important virtues to seek for in a woman than just sex.

5. Talking about double combinations, Pretty and Good cook had the highest combined votes at 21. This modern society is littered with ladies that spend more time in the salon or in front of the makeup mirror than they do in the kitchen. They know the different combinations of Mary Kay foundations, eyebrow shaping techniques and hair styles but can only cook one or two soups well, don’t know how to pound yam and have no idea of how to combine spices.

6. Another combination of note is the pretty and loyal combination with 16 votes. There is nothing more heart warming than a beautiful loyal woman.
Women are always chased by men, but in most cases, the more beautiful a lady appears, the more the chasers. But when you see a woman who loves her man and is loyal to him even though more handsome, richer and better men are toasting her. It’s a beautiful sight.

7. The next three double combinations shows a trend. Cook and Smart got 14 votes, Loyal and Smart got 13 votes while Pretty and Smart got 11 votes. This points to the importance of being smart to a man. You can be a good cook, be loyal and be pretty but if you are not smart, if you can’t carry yourself in public, if you can’t communicate properly, if you can’t reason, if he can’t exchange business ideas with you then you have a long way to go.

9. Talking about sex, the real reason why most guys didn’t choose a lady with great sex apart from the obvious fact that the money ($5) wasn’t enough to buy that quality is the fact that sex for a man isn’t necessarily about your prowess in bed but about your open mindedness in sexual matters.
It’s not about how good you are in bed for a man but how often you will let him have you when he pleases, how often you initiate sex with him, how often you inconvenience yourself to satisfy his sexual urge, how often you are open mindedness to his sexual fantasies. A virgin can be all of this to her husband. It’s all about the mind.

It has been an amazing experience with these two surveys opening my eyes to things I took lightly and I’m sure it has been eye opening for you too.
My sincere gratitude goes out to the 100 wonderful people (50 guys and 50 ladies) that participated in the survey.
God bless you all.