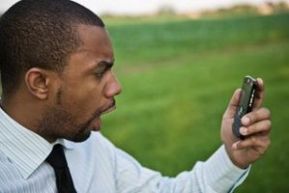 I try as much as possible to simplify the message in my articles with real life situations in a bid to make it stick in the memory of the reader. This funny titled but message carrying article is no different. Its very easy to understand and memorable because we have encountered either of these Blackberry problems one way or the other.
Let’s proceed:

1. Blackberry Freezes (Patience):
There are times and I am sure this has happened to every Blackberry user when your phone hangs freezes. Most times the “loading timer” pops up like its actually loading a damn thing but it stays there for minutes. At this point, you can’t press anything on the phone, you can’t go back, you can’t receive calls and you can’t even turn it off. The ironic part is that most times this happens when there is something urgent you want to do with the phone. In annoyance some of us have threatened to smash the phone on the floor or throw the damn thing out of the window. In that rage, your right sense tells calls you back to order, telling you not to because you will pay dearly in terms of money to buy a new phone or repair the smashed phone. The voice keeps telling you “Endure, Endure…Be Patient” for this storm would soon be over..lol

Marriage is just like a freezing blackberry. Its never smooth sailing. Its never all rosy. Its never luvvy duvvy. There are moments you feel like stoning your partner on the ground. There are moments you feel like throwing her out of the window. These moments will always come but the same way you don’t smash your Blackberry when it hangs, do not attack your partner. Attack could be emotional attack which involves insulting him, chastising him, disrespecting him, bastardizing her character. Attack could also be physical which involves slapping him, beating her, mal handling her.
Remember that love is patient. Exercise that same kind of patience you accord your freezing blackberry with your spouse. Think before you talk. Words are like bullets that would leave wounds for a long time.

2. Blackberry Without BBM (Commitment):
Many years ago way before I started using Blackberry I had this uncle that had a Blackberry. I had always heard of BBM but had never used it. I found out that he had a Blackberry so I asked to see his BBM but he told me that he doesn’t use the BBM on the phone and I was like . How can someone have a Blackberry and not be using its most powerful weapon which is the BBM. For me it was simply a case of ignorance, he was blatantly ignoring the potential of communication via BBM. Fast forward to 2011 or so when I finally could afford my first Blackberry, I had my eyes on one thing and one one thing only; Blackberry Messenger. I have developed a huge following on BBM with over 2000 contacts and I consider them a second family. I don’t see online communication without BBM (maybe I am just being naïve). Suffice to say that I use a Blackberry just because of the BBM service it offers (that’s until they started sharing BBM with Andriod and Apple…mcheew). I have tried BBM on Android and iPhone but never feels the same way like BBM on Blackberry.

Marriage could be seen in this light. Love is a commitment not a feeling. Marriage is being committed to loving someone for the rest of your life even if better, slickier, finer, richer alternatives pop up. When love is a feeling then its fickle because feelings variate. Sometimes I feel like watching TV, other times I feel like reading a book. When your love for your partner is a feeling, then when he/she offends you, the feeling to love goes away and the feeling to keep malice stays. But when love is a commitment, you love him/her whether she is on your good side or your bad side. You love not because of what she gives you but for who she is. You love not because of how he makes you feel but for who he is. The same way some people are committed to Blackberry through thick and thin despite of all its shortcomings, be committed to loving your partner ignoring his/her shortcomings.

3. BBM is now on other platforms (Sacrifice):
Its no a secret that BBM is the biggest selling point of Blackberry. It is their baby. It is their money maker. It is what made us buy Blackberry phones and its still what makes us use Blackberry phones. It was however a surprise to all when Blackberry decided to give out its baby “BBM” to be used on other platforms like Android and iOS users. It was considered business suicide for Blackberry to give up what made it so successful to its competitors in the mobile phone market. From what I read, Blackberry was loosing money fast, iPhones and Android operated phones had taken over the phone business relegating Blackberry to the back burners. They tried their best to regain a foothold but their Blackberry 10 phones like Q10 and Z10 weren’t making the waves they expected. Giving out Blackberry was them saying “if we can’t get you to buy our phones, at least we have you using our application”. They literally sacrificed BBM in order to remain relevant and keep the company afloat.

Love makes sacrifices. Marriage is all about making sacrifices for your partner. If you’re not ready to make sacrifices then marriage is the wrongest move for you because marriage is a sacrifice-laden adventure. Love inspires you to say “no” to what you want, in order to say “yes” to what your spouse needs. Love is willing to make sacrifices to see that the needs of your spouse are given your very best effort and focus. The same way Blackberry sacrificed BBM, that same way you need to sacrifice your comfort, your money, your time, your pleasure for your partner.

4. Blackberry’s Bad Battery (Recharge Spiritually):
The most annoying problem I believe that Blackberry has is its horrible battery life. We (Blackberry users) seem to have to carry our chargers everywhere we go in order to charge our phones. It got so bad that I saw a girl looking for a charging port in the female toilet at a cinema. In marriage, we need to be recharged on a regularly basis so as not to run out of steam because marriage is a long distance race not a short distance sprint.

Recharging in this aspect is spiritual charging. You are the phone, you’re charger is the Bible while the charging port is God.
The same way we are always looking every opportunity to charge phones, we should also be looking for opportunities to recharge spiritually together as a couple. Marriage is a likened to a triangle; the apex is God, the edges comprise of the husband and wife. Major decisions in the house should never be taken without consulting God. A couple must endeavor to put God first in everything they do. A couple must pray together because as its always said ‘a family that prays together, stays together’.

Blackberry is not so bad afterall, it has taught us four fundamental aspects of marriage which are:
1) Patience
2) Commitment
3) Sacrifice
4) Recharge spiritually